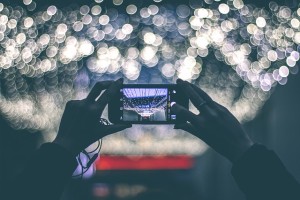 There’s nothing like fame to get you to social media stardom. Many famous people today are well known not only for their respective talent, but also for their presence on social media. Is it just because they’re famous these people have millions of followers, or is there something more to it? Building an online kingdom isn’t a fluke and takes intentionality. We were curious about what that looks like, and did a mini-case study on four high-profile celebrities and learned some interesting lessons about social media:

Lesson #1: Have a conversation

More and more stars are getting this right, but one who does it better than most is ABC’s Castle star Nathan Fillion on Twitter. He keeps it lighthearted and fun, and makes a habit of engaging with his fans by responding to their tweets.

Your takeaway: When people take the time to comment or engage with you on social media, they want to feel heard. Your thoughtful response gives them the acknowledgement they want, and opens the potential for a relationship.

Every business and brand is looking for the radical fans and supporters of your products or services. Doing this is no easy trick, but one of the best ways you can is by making it clear from the beginning that at the end of the day, you’re in it for people, not money. Lady Gaga is an excellent example of this. Despite her fame, she is committed to building relationships with her followers, even to the point of (early on in her career) choosing smaller venues over larger ones. She created a nickname for her fans – Little Monsters – and gave them a private social network to connect with her even more intimately.

Your takeaway: Treat your fans well, and they’ll become your tribe. Use social media as a way to develop relationships and offer value to them they can’t find anywhere else.

Lesson #3: Be invested and genuinely care

It can be hard to really care, but choosing to make people feel like they’re the most important person in the room is your key to success. Taylor Swift does this well by going out of her way to connect with people on social media. Her responses are well-thought-out and caring; she’s become known for giving genuine complements and encouragement to her fans.

Your takeaway: People know “fake” from a mile away. Put thought and heart into how you respond to and interact with people on social media, and avoid getting stuck on “auto-pilot” mode with it.

Let’s talk about George Takei for a minute. He’s a social media sensation, with 1.74 million Twitter followers, 102,045 YouTube subscribers, 290,000 Pinterest followers, and almost 9 million Facebook fans. There’s no way he’s solely responsible for maintaining all those accounts, and yet the success he has is because of the consistency across all platforms in being true to his message and personality. The secret is the team he’s developed that knows how to “be him” on the internet.

Your takeaway: You may not have the time or ability to manage your social media accounts, and developing a team that knows your company’s personality and values inside and out is key to having a team that can consistently create messaging true to who you are.

You may be building your online kingdom from the ground up – and you might not ever have 9 million Facebook fans! – but you can build an online community for your business filled with loyal fans and backed by a good team by showing you care and creating genuine conversation.