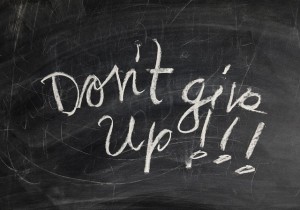 Image courtesy of Pixabay and geralt

Being an entrepreneur is no joke! It often calls for long days, sleepless nights, and nonexistent weekends. The flipside, however, is what makes it worth it: doing what you love to make a difference in your sphere of influence. Some days, the rewards clearly outweigh the challenges. But other days, the obstacles seem insurmountable and you might find yourself questioning why you’re doing what you do.

Every day, we all can use a reminder that says, “you can do it!” Today, here’s some encouragement for when the going gets tough from the stories of veteran well-known entrepreneurs:

Walt Disney got fired for lack of creativity and had to close his first company. He faced criticism and many circumstances of failure before establishing one of the most well-known creative empires in the world.

Sometimes, you have to keep persevering for a long time before success comes your way. In the meantime, keep believing in the dream and never stop moving forward.

Andrew Carnegie (Carnegie Steel Corporation) overcame poverty to become the richest man in the world during his time. He let his past drive him to give back. After selling his company, he gave millions to the New York Public Library and founded what would eventually become known as Carnegie-Mellon University.

Just because you feel like you’re starting as far away as you can get from your goals doesn’t mean you can’t attain them.

Steve Jobs (Apple) started a successful company he was then fired from, seemingly ending his hopes for success. Against impossible odds, he bounced back time and again from failures and setbacks to continue pushing creative boundaries to continually set the standard in the tech industry.

Failure is never final unless you let it be.

Arianna Huffington (Huffington Post) endured rejection as an author before finally being published. Even then, it isn’t books she’s known for, but her website, The Huffington Post.

What you think you’re supposed to do might not pan out, but the failure might be preparing you to refine the dream and walk through a different open door.

Sam Walton (Wal-Mart) worked odd jobs through school. It wasn’t until he was 26 after serving in the military that he bought his first variety store. Relying on creativity, he redefined how he did business and in 20 years became known as the richest person in America.

Your combined experiences might seem random, but pulling them together equips you to do what you best.

Learning from mistakes and being willing to try again are the two ingredients to finding success.

Oprah Winfrey had a traumatic upbringing that included rape, abuse, and running away from home. Her high school job turned into her career, and by leaning in to her past experiences, she recreated what daytime talk shows look like.

Personal struggles don’t have to limit you. They can become what gives you uniqueness and a voice in your vocation.

There are common themes in all these stories: failure, getting fired, being laughed at… And also getting back up again the next day to try again. No matter what challenge, difficulty, or failure you’re currently facing, you have what it takes to make it through. You can push through and see the success on the other side!

Posted in Entrepreneur Inspiration, Prosper
← The Latest in Social Media: Facebook Updates6 Vital Lessons I Learned By Taking A Vacation →