“If you want to win the lottery, you have to make the money to buy a ticket.” Lou Bloom

A man at the end of his income, we immediately see the brilliant and complex nature of Jake’s character in this dark story of one thief’s quest to weasel his way into an industry and into the spotlight. Lou (Gyllenhaal) becomes intrigued by the pursuit of capturing sensational stories in exchange for dollars and we watch him move from painfully unaware into an orchestrator of art and his career.

From the start, his rookie moves make me cringe, but his determination, drive to learn, and motivation are relatable. Throwing himself into a freelance profession, we tag along with Lou as he learns the lingo, the equipment, the strategies and how to navigate the ethically-questionable work of TV news reporting. 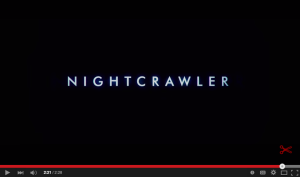 The movie is crude, the language harsh, and it grips various emotions, especially from my female and business owner perspective, but what we see from this portion of Lou’s life is worth a conversation. This film is the story of an entrepreneur, clawing his way into and through a profession he knows nothing about, using nothing but his smarts and his ability to learn quickly to simply get ahead.

A few takeaways from the film, from my humble perspective:

From the moment Joe Loder (Bill Paxton) arrives on the screen, we feel the competitive nature of the sensational news-chasing job and being “the first guy on the scene”. They’ve just captured a terrible accident, on camera, and whisk themselves off to sell the footage to the first station who’ll pay top dollar.

Lou asks questions, observes and fuels his drive by stealing a bike in exchange for equipment. He throws himself into crime chasing, flubbing his way through, completely unaware of boundaries and finally captures footage he believes to be valuable.

Nonchalantly walking into a new station, he is directed back to Nina Romina’s (Rene Russo) editing studio, only to snag her attention by enticing a juicy cut of the shooting crime scene her caught on camera. After watching the reel, Nina quickly spins the story, using the graphic footage to boost interest in the segment. She praises Lou, pays him for his work, and offers him advice for future pieces. He’s hooked.

What we learn from Rene’s character leads us to the conclusion that story spinning is a way of life for television producers. It makes me question truth.

2. Immerse Yourself in Learning Your Craft

Lou heads home to see his footage on the news and we watch him begin his portfolio by saving the first segment to his computer. What happens next is intriguing. He begins searching information online. He turns his police scanner up and listens for various police radio codes, taking notes and learning each use and call sign. We learn that, in certain industries, anyone can make a new career if only by simple online research and studying.

“I haven’t had what you would call a formal education, but you can find most anything if you look hard enough.”

3. Even False Confidence Can Be A Magnet

While you can’t imagine that Lou has ever been a manager, let alone a business owner, we find him interviewing for an intern position he’s suddenly seeking to fill. Lying to and asking the applicant tough questions, Lou ultimately offers Rick (Riz Ahmed) the job. I can only piece together that he has learned technique through studying language patterns and business courses.

Rick negotiates pay and they shake on the deal. He is green, but Lou spends hours teaching him what to listen for. It’s apparent that Lou doesn’t need talent, he needs a body and someone who is eager or perhaps, as desperate as he is. He succeeds.

But Lou is a tough business owner, yelling at Rick and expecting, no demanding, perfection. But he sticks it out, for no known reason except to earn a flat nightly rate. Was he taken advantage of? We find out later in the film, Lou would use any means to escalate his own stardom and revenue.

Without spoiling the movie, in the final half we watch Lou make decisions with no sense of humanity or reality and only seeking the best frame of his footage.

In each scene, we expect Lou to receive consequences of his actions and somehow he navigates away from them each time, reminding me of the stark realization that even though this is a movie, life just isn’t fair. Unscrupulous business owners do exist and they aren’t always caught.

Nightcrawler gripped me as a marketer and an entrepreneur, simultaneously.

Marketer: From the news desk side, marketing is paramount to ratings and my own personal theories about inflated and hyped up new stories seem reinforced. Remember that your attention is valuable and companies will do what they need to do to get you to watch, buy and talk about them. Don’t be gullible.

Entrepreneur: Immersing one’s self in a profession isn’t always done for the right reasons. When priorities are unbalanced, we can see ethics begin to fall aside. If you have a feeling about a professional you’re working with or have questions about the standards they live their career by, dive deeper. Don’t neglect your gut.

“Why you pursue something is equally as important as what you pursue.”

Review from MetaCritic:
Starring: Bill Paxton, Jake Gyllenhaal, Rene Russo
Summary: Lou Bloom (Jake Gyllenhaal), a driven young man desperate for work, discovers the high-speed world of L.A. crime journalism. Finding a group of freelance camera crews who film crashes, fires, murder and other mayhem, Lou muscles into the cut-throat, dangerous realm of nightcrawling — where each police siren wail equals a possible windfall and victims are converted into dollars and cents. Aided by Nina (Rene Russo), a veteran of the blood-sport that is local TV news, Lou blurs the line between observer and participant to become the star of his own story.