Hard work, vision, entrepreneurship and the making of a true American dream!

If you haven’t seen or heard of it, “Selena” is a movie based on the life of Selena Quintanilla Perez: a once up-and-coming Hispanic pop star.  This biography follows the star from her humble beginnings to her untimely death in 1995 at the age of 23. In a nutshell, Selena (played by Jennifer Lopez) and her family are hard-working singer/songwriters looking to breakout and make it big in the music industry. It’s a real American drama. But what makes them successful? Here are some important habits to observe.

Starting from the very beginning of the story, Selena and her siblings grew up in a close, loving family based in Texas with her parents Abraham and Marcela. Struggling to make it by, you see the reality of the American dream: it doesn’t always work out the first time. The movie focuses on Abraham for a time, showing his passion for music and the disappointment he had endured as a younger man trying to make a name for himself singing in a band. Being discriminated against because of his heritage forces him to take on a job he doesn’t necessarily like, but he embraces his role of a married father of 3.

During the course of the movie, you see the passion Abraham instills in his children to do and be better than he did in the music industry. You sense from the parents that they both try their hardest to give their children the best future they can. After abandoning his dream for a time, Abraham sees a new dream: one with his family. And this time he wasn’t going to give up so easily!

Determination Will Take You Far!

Abraham – after hearing Selena’s naturally great voice – forces the launch of a family band. Selena along with sister Suzette on drums, and brother A.B. on the guitar, begin learning how to play songs. His goal is to build an opportunity for his children in the music industry and break the racial barrier that held him back many years ago. Pushing the children to go above and beyond just a fun hobby, he makes them learn how to sing in Spanish. There are many times during the course of the movie where you feel his almost stifling concern to guide his children down the ‘correct path’.

As the movie progresses, you see how the Quintanilla family sacrifices time with friends and participating in normal childhood activities to play a part in this family affair. Although they would rather play outside as children do, Abraham is adamant that they be disciplined and study the craft. Eventually, they would learn to love playing, writing and performing. Selena, as a group, was very popular in the Mexican-American culture, yet many of her fans didn’t know that she was not a born Spanish speaker.  After a successful  Spanish interview, Selena jokes that her Hispanic fans will be so surprised when they hear her American album, wondering how in the world she learned to speak English so fast! Selena (as well as Abraham) is constantly pushing and challenging herself to do more for the fans and more for her family.

Just as Selena is gaining popularity, the family decides to bring in some new associates to help the band in its growing endeavors. They include a talented young guitarist, Chris Perez, and a family friend, Yolanda Salvidar. While the partnership with Chris starts off tumultuous, the mood changes after he and Selena fall in love and elope. Even though Abraham is against it at first, he warms up to the young and talented guitarist. The movie does a great job in providing you the feelings of all parties: the couple that loves each other, the father that only wants what is best, and the family that doesn’t want to let go of what they have worked so hard for.

The addition of Selena’s best friend, Yolanda Salvidar to the family band unfortunately doesn’t have such a happy ending. Yolanda for many years now, had run the finances for the band and spearheaded the fan club. She was responsible for sending the fans their requested pictures, signatures and other mementos. Being one of Selena’s closest friends, Yolanda had been privy to the finances in Selena’s fan club and her new clothing line. It is apparent now, however, that she had been stealing from the Quintanilla family and the fans.

Heartbroken, Selena did not want to believe it, even after confronting her with Abraham. Selena agreed to meet with her once more to pick up some documents and discuss business with her. It was at this last meeting that Yolanda shot and killed her friend and rising super star, Selena Quintanilla Perez. She would later explain that she tried to kill herself, but accidentally shot Selena instead. The Quintanilla family would never be the same and the group would be disbanded. Sadly, this story has a tragic ending, but makes you think and ask: does every business really need a partnership? And who should  I consider to partner with?

At a larger than life concert at the Astrodome, Abraham looks on and talks with people about getting their music on the American mainstream. The pieces of the puzzle are coming together. They finally have made it big. After all the hard work the family went through, the dream that started with Abraham so many years ago is being realized. From singing in a small town fair in front of 10 people, to being a successful band with a number one hit, the journey has been long. It has been filled with disappointment, perseverance, and determination. Most people would have been discouraged, but you can’t give up so easily on your dreams!

The movie tells a time old tale about the value of hard work and also being careful what you wish for. Putting hard work and love into whatever you do can be seen by other people. Having a driving force also helps you constantly challenge your abilities. With money and power come problems: friendships and family can be tested. As for Selena herself, we can see that she wanted to be true to who she was, and she accomplished that. 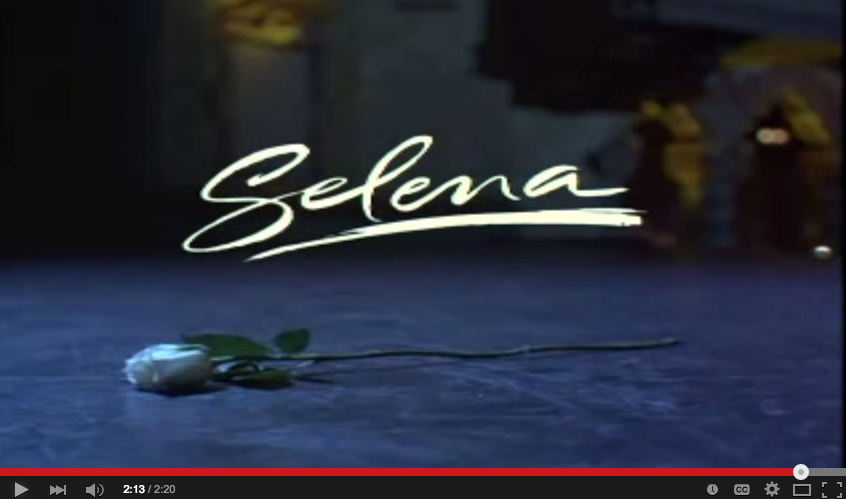 Image and video courtesy of YouTube and andrez germanotta

What did you take away from the movie Selena?

Posted in Blog Strategy, Business Lessons We Learn From Movies
← Finding Motivation When You Need It MostBusiness Gifts for Long-Term Customer Relationships →