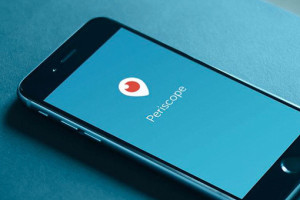 Recently, I’ve started seeing different posts on various social media platforms pop up talking about some thing called “Periscope.” At first, it was mostly some of the public figures I follow sharing their profile on Facebook or Instagram. Then, a few weeks ago, I started seeing some of my friends begin talking about it, too. I broke down and looked into learning about this new social media platform, and I am excited to share what I’ve found because it has big – BIG! – potential for business owners.

Periscope, owned by Twitter, allows you to stream video live to your audience. So instead of filming something, maybe editing it, and then posting it to YouTube, Facebook, or Instagram, you share what you’re doing right then, right there. Uncut, unedited, and completely live. Basically, think of it as your own private TV channel.

The back story according to Periscope is that they “became fascinated with the idea of discovering the world through someone else’s eyes.” The entire concept revolves around being able to see, in real time, what’s happening somewhere else – almost like being there yourself.

So what does this mean for you? What do you need to know right now about this new platform? It’s a brand new site (just over a year old) so the rules are still being made, but here’s a general overview so you know what people are talking about.

Like all other social media sites, you download the app on your phone and create an account. Right now, you either do this by linking it to your existing Twitter account or by linking it with your cell phone number. Currently, all the streaming is done from your mobile phone.

Every social media site has its own jargon: likes, tweets, hearts, etc. Periscope is no different. A Periscope user is called a Scoper. A live-broadcast video is called a Scope. Like Twitter, users Follow each other and similar to Instagram can give Hearts as a way of liking a broadcast.

Once you’re in, you have the option to follow other users. You can watch live broadcasts, replay old ones, and engage in feedback for broadcasts. And, of course, you can send your own. Once you’ve sent a broadcast out, it will stay live on the site for 24 hours, giving users who missed it live the chance to replay it and still give feedback on it. After 24 hours, your video disappears from your public profile (but not your account).

Within the first ten days, over 1 million people joined Periscope. The current user count is somewhere around 10 million. Being so new, there’s not much data about who the users are. One notable fact is that Periscope has a large amount of influencers already using the platform; almost 7% of users have more than 10,000 followers. Recent statistics show that Periscope users are watching an average of 40 years worth of video every single day.

Should you jump on the bandwagon?

The creative ways you could use Periscope for your business are endless. How-to instructions, step-by-step guides, behind-the-scenes moments, and real-time announcements are all brilliant ways for brands to engage with their audiences. If your target market is on the cutting edge of technology, being an early adapter could be advantageous for you!

Over the coming months time will tell us more about Periscope as a social media platform. We look forward to watching the growth and seeing how this new platform evolves as we determine how to best use Periscope for business!
-Sarah Gill

Posted in Promote, Social Media
← Old Town Business Owner Jake Hammer Shares Business Growth Insight Your Small Business Can Relate To & Learn FromHow to Use LinkedIn for Both Personal and Professional Use →