Have you been “Swarmed” yet? If you were using the location-based check-in app, Foursquare TM, prior to May 15th, 2014, then you are probably somewhat familiar with Swarm at this point.

FoursquareTM chose to rebrand itself and, as part of its rebranding efforts, it spun one half of its functionality (the check-in half) into a second app. They named this new app, “Swarm,” and introduced it on May 15th, 2014.

The FoursquareTM app, itself, now focuses entirely on helping its users who wish to search for nearby places. Foursquare’s rebranding now puts it in direct competition with two other local search platforms: (1) Yelp and (2) Google Places.

This is how the FoursquareTM Help Center defines Swarm:

Now, with just a glance, you can easily see who’s nearby. Tap on a friend to see where they are, like their check-in or send them a message.

Loyal FoursquareTM users now find themselves having to readjust to using its sister app, Swarm, for check-ins. Not surprisingly, many people have expressed mixed, and even negative, feelings about the spinoff.

This article will take you through some of the ins-and-outs of Swarm and how it may benefit its users and businesses.

Swarm plans to be the “fun” half of FoursquareTM

One of Swarm’s features is called “Neighborhood Sharing.” This allows you to reach out and share your general location with your friends. That way, if any friends are nearby, you can easily invite them to join you from Swarm.

Do you miss the coveted “Mayorship” feature of FoursquareTM? You’ll now find this feature in Swarm. However, you’ll only be competing for this title with your friends now, rather than the entire world. Sadly, if you were a fan of badges on FoursquareTM, those are gone, but you will find plenty of fun stickers on Swarm.

Swarm Data: What the Numbers Say

This may not be the most optimistic data for Swarm, but it’s still a fairly new app. Time will tell whether people will start warming up to it.

So, who is “swarming up” to Swarm?

The primary demographic and main target for Swarm includes mobile users who live in urban areas. It’s still too early to tell, but it appears that the majority of users are Millennials (ages 18 – 33) and college students.

Is Swarm okay for the next generation to use or is it a safety concern?

When it comes to kids’ safety, parents should be concerned with any location-based app, including Swarm. Some of Swarm’s safety advantages, for the next generation or anyone, really, include the following:

Rules and conditions for Swarm users

Following the rules makes Swarm fun and safe for everyone involved.

The rules for using FoursquareTM/Swarm are extremely detailed. They include the following:

You can read the entire “Terms of Use” for Foursquare and Swarm here.

FoursquareTM and Swarm both take privacy very seriously. They offer privacy options which can be edited so that only certain information appears on your profile, and some information can be hidden entirely.

According to information from the Foursquare Help Center, the following profile information is viewable to the public:

One important thing to keep in mind, regarding your privacy: Swarm more or less tells us that we don’t have 100% privacy when using its app. Swarm explains why and how it collects data from its users, including some of their personal information. It also let us know why it may share your information with third parties.

How can a business use Swarm?

Although FoursquareTM and Swarm have become two separate apps, they still work together. Swarm, with its gamey and social features, is geared more for individual use, however. Businesses, on the other hand, are more likely to find FoursquareTM is the better app of the two for connecting with potential and current consumers.

Swarm does offer possibilities for businesses that aren’t afraid of creativity though. Evan LePage shares a good example in a recent article for Hootsuite, “Foursquare vs. the Swarm app: What’s the Difference?”:

A food truck might, for example, use the Neighborhood Sharing feature to let friends know they’re located nearby.

Business owners may find Swarm to be useful from a social perspective. For example, they may use it to help them find other potential business partners or clients who are in the same place at the same time. Having the ability to set up impromptu meetings through Swarm could lead to new business partnerships, lead generation, or even a completed sale. Business owners might also consider using the Swarm app, with its social sharing capabilities, as a way of seeking feedback or for crowdsourcing ideas.

The first step for a business that wants to gain local exposure through Swarm – as well as capitalize upon it – is to claim any venues already listed for it on Foursquare, or create new listings. As well, since your business’ information is shared across the two platforms, any edits or updates made on one site is seamlessly transferred to the other. This includes check-ins and reviews.

You can learn more about setting up your business’ listings and using FoursquareTM as a business by visiting its site here.

Other activities that will help your business show up more often in Foursquare’s local search results – and subsequently boost your business’ results – include:

Foursquare sums up how Swarm can work for your business:

People use Swarm to keep up and meet up with their friends. They use the app to check in and let their friends know that they’re frequenting your business. Your business will show up as a check in option if a user is nearby.

Reviews and ratings for Swarm

Many loyal FoursquareTM users have expressed frustration over having to use two separate apps when they only had to use one before. Many also complain that having to use two apps drains their already exhausted battery supplies on their mobile devices. Some users have left Foursquare entirely, rather than dealing with the new app, saying they find it confusing and no longer useful for them. Others don’t mind using Swarm separately, and enjoy it for the social app that it is.

As you can see in the snapshot below, the Swarm app has received 92,810 “5-star” ratings, and shows an overall 3.7 out of 5-star rating (based on 208,376 reviews). Perhaps things are looking up for Swarm, according to these recent reviews and rankings on the Google Play Site. (Snapshot taken on 11/11/14 from the Google Play site: https://play.google.com/store/apps/details?id=com.foursquare.robin&hl=en). 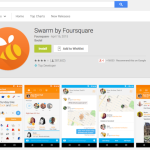 Get Swarm today through play.google.com

What are your thoughts about Swarm? Do you think FoursquareTM made a mistake or do you see potential for a new audience? I’d love to hear your thoughts on how businesses may benefit from – or not – from Swarm. Please feel free to leave a comment below.

The team at Propel are each growth experts who know precisely how to use their expertise to Propel your business. Learn more at https://propelbusinessworks.com/about/our-team/

View all posts by Propel Team →