Highs and Lows: How #SMWNYC 2014 Ranked  – from an entrepreneur’s perspective

The jury is still out on whether Social Media Week – New York City (#SMWNYC) was worth the travel and valuable time spent waiting in lines, and yet the event as a whole was insightful (and I made some #awesomesauce connections). While I may attend again for some reasons, I certainly would not if others weren’t remedied. What plagued us?

Questions like:
Where do I go for my next session?
When did the SMW mobile app stop working?
What do you mean it’s standing room only, when I pre-registered for each individual session 3 weeks ago?
There are really one hundred people wanting and waiting outside the building to get tickets and they can’t?
I’m sorry, what was the description for this “masterclass” and how was that relevant?
Wait, I have to go back downstairs just to stand in line for an hour to come back up to the same room?

Here are my list of highs and lows on how #SMWNYC ranked from an entrepreneur’s perspective: 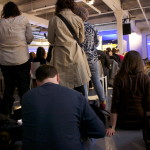 The event website seemed fairly organized upon first visit. I even caught on that I needed to register for classes prior to the event in order to ensure I would have a seat, which ultimately ended up being a joke. What was frustrating was that the mobile app wouldn’t show my personal schedule, there wasn’t a way to add my schedule directly to my iCal (or at least, not a solution that I could find easily), and it wasn’t until 1-2 days prior to each session that the reminders came through my inbox. So, ultimately, I’m glad I printed my schedule and carried it around with me, so I would know what sessions I was to be in next.

After session one, I muddled my way into another stage area where the volunteer asked what stage I was supposed to be at.  My printed schedule didn’t offer the stage name, just the session title.  No one knew the session title, so we were all just as lost as the next guy.

The app that had been created for the event wasn’t helpful either. Navigation prevented quick retrieval of the information I was eagerly looking for, knowing I may miss out on the next session, which I had flown across the country to attend.

After the hot mess of Tuesday’s logistics, an email was received that all but scolded me.

“Dear Passholder (very friendly SMW – whatever you do, do NOT address me using my actual name), You MUST be here NO LATER THAN such and such time.”

No apologies for the mess of yesterday.  No thank you for your patience as we figure things out.  Instead, I felt threatened, cattle prodded and treated like a kindergartener. Uhm, thank you SMWNYC, but I am a business owner and my interest, feedback, perception and the money I spent to be here should be just as valuable as the TIME I am spending.  I don’t care if this is New York City and you  think you have to have a chip-on-your-shoulder confidence. 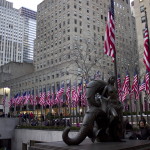 New York City is amazing and this event gave me a great opportunity to visit again after a 10-year hiatus. It is the obvious choice for thought and industry leaders. However, if the event grows, I would hope it would branch out to the west coast. Perhaps L.A. or Seattle? Even Vegas would be closer and more convenient – even less costly for the week-long stay required. 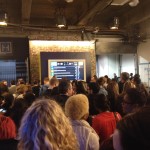 Highline Stages is a cool, urban 3-story studio space on the Westside of Chelsea. It was decorated well (although décor/production cost quite possibly could have been spared in order to invest in a smarter space) and felt right for the event type.

Unfortunately, the venue was 3-stories, of which the upper floors (where the sessions actually were) could only be accessed via two staircases or a crate elevator (a third staircase had been sanctioned as the speaker/volunteer pathway).  Without knowing just how many were in attendance, the space not only felt crowded it, as a matter of simple fact, was crowded… which also led to a temperature issue. 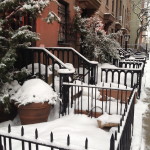 Is February really an ideal time for a worldwide conference? Hard to say what the weather will be like in NYC in February? I’m not so sure. My flight into LGA the Saturday prior to SMWNYC was rerouted to Albany due to ice and snow, which closed LGA down for hours. Then, my flight back home was delayed by dense fog.

Yes, it snowed two days I was there and was close to freezing during the whole week.  This warranted an increase of temperature inside, but with the number of electronics, lights and bodies present, the heat was stifling.  Thank goodness they had pre-planned a complimentary coat check. 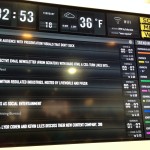 Since my husband works for a worldwide network service provider, I asked him how SMW could have remedied this issue, but the answer wasn’t as easy. Without knowing exactly how the wifi network was setup or configured, what I do know is that while we were waiting in endless lines we were often switching between 4G and the network due to lost service. For hundreds of business owners, managers and professionals – this was a problem! Unable to do anything but stand in a line to attempt admittance into a session, ability to be productive while in line would have been considerate.

But, we digress. Let’s not even start on the mobile app which promptly quit working after Tuesday (yes, that’s day #1). 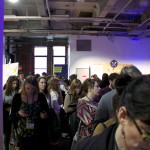 While attendance numbers are good for ticket sales and sponsorship exposure, I can’t imagine being a sponsoring speaker. By Wednesday we had been given specific areas/lines to pile into and wait in for each session. What I didn’t see coming was being turned away from a class I had pre-registered for 3-weeks prior.

I’m not sure if they over-sold tickets, but when I registered for my sessions, quite a few of them told me I was “the last to register”.  Clearly though, the organizers didn’t plan carefully enough.  To have waited in line only to be told the session was at capacity and I could not attend just added injury to insult.  What do I do now? Another session? Obviously I don’t have enough time to go stand in another line.  And now my phone is dying, so I need a charging station. Oh, wait – they’re all full.

So, attendees got smart. We knew we had to leave whatever session we were in early enough to get in line for the next one so we wouldn’t be turned away. This had to leave the sponsored speakers who had walk outs before their session was over irritated.

The lemonade we made out of the attendance lemons was in line. By Wednesday we figured we might as well start using the time we were wasting in line to meet other people and network since we couldn’t get reliable wifi service to check our voicemails, inboxes or social platforms. That proved useful, but I never met the same person twice. And if I did, it was planned. While this can be a great benefit for networking, it also made finding people a challenge. Yet when we tried finding people online, again, our service was spotty. It was a vicious cycle. 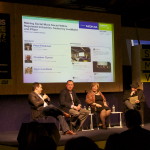 Most of the stage sessions were right on target.  Amazingly relevant topics from industry experts and leaders that kept my fingers working on speed typing notes I could bring back to my team in Portland.

We heard from the likes of @sethjs of Google, @JPerelman of BuzzFeed, @MasterCardAndy of Master Card (who else?), @heyitsnoah and @James_Gross of Percolate, and Jon Williams of Linkedin… among so many others.

– – To close this out, while I can’t say it was all enjoyable – to the organizer’s and volunteer’s credit – everyone hustled and did work their rears off. Every day they seemed to learn more, adapt and try. By Thursday, a #tagboard had been added to the crate elevator line area for entertainment. To top it off, upon entering the elevator, we giggled at the Josh Groban song “You Raise Me Up” being played while we ascended to the third floor. I felt like I was at Disneyland, waiting in line for the elevator on Tower of Terror. At least, we felt, they were able to laugh at themselves. Too bad we didn’t feel like much more than rats in a race.

Next year, I’ll probably opt for watching live streams of the sessions from the comfort of our office, foregoing the long, delayed flights and freezing temps, where I’ll be fully equipped with wifi, a comfortable chair, an adjustable thermostat and a team who values quality of life enough to pause for lunch.

Posted in Classes and Seminars, Promote, Social Media
← Importance of Taking Breaks at WorkWhy We Think Strategy is the Most Important Thing →